Affordable Group One Harvest an Indicator for Karaka 2019 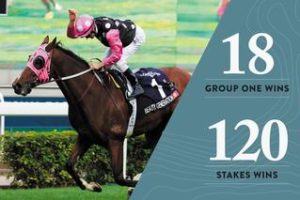 Time and again the quality New Zealand thoroughbred attracts the industry’s heavy hitters from near and far. Their phenomenal record in Australasia’s biggest three-year-old races, and some of the most prestigious races around the world, is evidence to their winning edge.

A remarkable five out of the possible seven Group One Guineas races in Australasia in the 2017-18 season were claimed by these world-beating yearlings who went through the sale ring at Karaka.

Mighty Boss (Not a Single Doubt) kicked off the season’s record when he scored the highlight event on Caulfield Guineas Day, and the Guineas with the richest purse, the A$2 million Group One Caulfield Guineas. Azamour filly Aloisia (NZ) also stepped into the limelight with a victory in the A$500,000 Group One Thousand Guineas.

The Group One success continued from Caulfield to Flemington when Grunt (NZ) (O’Reilly) overpowered Victoria’s best three-year-olds in the A$1 million Australian Guineas. This season, Grunt returned to Flemington and won another Group One over the same course and distance, beating a stellar field in the Makybe Diva Stakes.

Savabeel colt Embellish (NZ) was the race favourite in the NZ$500,000 Group One New Zealand Two Thousand Guineas and joined the honour roll and two weeks later Savabeel was to the fore again, this time in the form of a filly. Hasahalo (NZ) came through the same Waikato Stud Premier Sale draft as Embellish and turned on blistering speed to win by four lengths in the NZ$300,000 Group One New Zealand One Thousand Guineas.

New Zealand sourced fillies are stamping their mark in Australia with statistics showing they won 36% of all Australian Group One filly races in the past six seasons.

With these Oaks winners costing as little as NZ$65,000, and these Guineas winners as little as NZ$180,000, the success they have on the racetrack is phenomenal. In the 2017-18 Australian season, New Zealand thoroughbreds earnt on average 36% more than Australian-bred horses.

Erasing any doubt as the world’s premier miler, Beauty Generation kicked off the season with three straight wins and delivered a fourth in the HK$25 million Group One Hong Kong Mile while brilliantly defending his title in the prestigious race. The reigning Hong Kong Horse of the Year has now won four Group One races in the last 12 months, accumulating more than NZ$11.4 million in prizemoney.

The New Zealand dominance in the mecca of racing has also been witnessed at longer distances with more than half of the BMW Hong Kong Derby winners in the past 15 seasons carrying the NZ suffix, and being the leading source of winners since its inception. Ping Hai Star (NZ) (Nom du Jeu), another yearling to walk through the Karaka sale ring, is the reigning victor of the prestigious Derby.

Award-winning performances are a common occurrence for New Zealand horses with 2017 Singapore Racing Awards naming five kiwi horses as title winners, including three who were purchased as yearlings at Karaka.

Other award winners to have been purchased at Karaka sales included Horse of the Year, Champion Four-Year-Old and Champion Miler Infantry (NZ) (Tavistock), and Champion Three-Year-Old Countofmontecristo (NZ) (Echoes Of Heaven).

Singapore’s marketplace is littered with these New Zealand-bred winners having claimed 72% of all black-type races last year, and the churn of racetrack stars has increased with 2018 additions.

Karaka Yearling Sale graduate Be Bee continued his winning form in his classic season winning the first three-year-old race of the season, the Singapore 3YO Sprint, with Mr Clint (NZ) (Power) following suit in the Singapore Guineas two months later.

In the peak of the summer season, Karaka 2019 will offer 1,284 of the very best thoroughbreds from around the country at the 93rd National Yearling Sales Series. The first 100 lots from Book 1 will go through the ring on Sunday 27 January, followed by six further days of selling covering the remainder of Book 1 through Books 2 and 3. All catalogues can be viewed online at www.nzb.co.nz, or you can request a hard copy at [email protected]