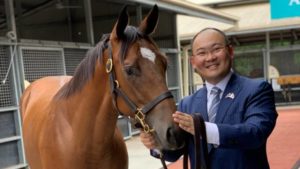 Chinese buyers are a boon to New Zealand's horse racing industry – though the sport in mainland China remains stifled, if not illegal.
There was "almost zero" Chinese investment in racing seven years ago, said NZ Bloodstock (NZB) sales manager Danny Rolston.
But New Zealand-based and overseas Chinese have become welcome and major players in New Zealand's notoriously cash-strapped horse racing industry.
At least two horses with Chinese links are set to compete in Karaka Million races on Saturday, which happens to be Chinese New Year.
Dragon Queen – owned by Taniwha Group – will be in the 2 year-olds' race, and Conqueror, bred by the super-wealthy China Horse Club, is over from Australia for the 3-year-olds event.
Dragon Queen is rated a $51 chance in her race, while Conqueror is a $3.40 second favourite behind Probabeel in his bid for $1 million glory.
Taniwha Group's managing director Alan Fu, 31, said having a horse run in Ellerslie Racecourse's Karaka Million was "a dream come true".
The group, which requires a minimum buy-in of $50,000, recently switched its name from the New Zealand Chinese Jockey Club to avoid being pigeon-holed.
"We're not only in New Zealand, or for the Chinese," Fu said. The group also buys horses from Japan, Hong Kong and Singapore, and its members come from a range of backgrounds – including Indian-born philanthropist Sir Owen Glenn, Taniwha Group's president, who is also on the China Horse Club's International Advisory Council.
But Taniwha Group focused on promoting New Zealand horses to Chinese investors. Fu said the Māori word for dragon encapsulated that, as dragons were considered horses of the gods in ancient Chinese culture. Many of the group's horses have dragon in their names.
China's horse racing industry was all but extinguished 1949, when the Communist Party criminalised gambling of all kinds. It's made a spotty return over the past decade, as newly wealthy individuals got hooked to the sport overseas and tried recreating a semblance of it at home: tracks get built then spend years unused, races get held but no betting's allowed.
Nevertheless, Fu said horse racing could be a sport designed for the Chinese – and that mainland China was an "exciting" source of people keen to invest in foreign horses.
"Gambling is illegal in China, but you just have to visit SkyCity Casino to see how much the Chinese love a wager. And they adore horses, which have many very positive connotations in Chinese history and mythology."
About 30 per cent of Taniwha Group's 85-odd members were based in China, said Fu. The bulk of the rest were New Zealand-based Chinese, joining for its business and social networking opportunities.
"We wanted to create a club of high level individuals where horses are the common interest, but people come on board to join a community who can do business together and really engage in the Kiwi lifestyle."
Taniwha Group, unlike some syndicates, sells equity shares in its horses. Each member invests into the group's entire stable.
"That way, everybody feels happy whenever one of our horses wins – and all owners always have something exciting coming up," said Fu.
With 45 horses, it's a small company compared to the likes of the Inner Mongolia Rider Horse Industry – a major horse breeder and exporter that owns the illustrious Mongolian Khan – but "enthusiastic and growing", said Fu.
"New Zealand needs cash injected into the industry and that's exactly what we're doing."